You might have realized that matching ALL records EVERY time, isn’t always the optimal way to perform your deduplication. You constantly run into those odd dupes which takes up all your time and prevent you from focusing on the new records you just added, or those that you want to use in your next campaign.

So why not limit the matching of records to only those records you want to use?

In this blog we will talk about Campaigns and Imports. Click here for more information about segmentation and filtering, or check out the user guide.

Say that you have created a campaign, and you have 10.000 contacts in it, and now you want to make sure that there are no duplicates within the campaign, as this clearly will impact your response rate, and also degrade your prospects view of you as a well-organized company (without duplicates).

Creating a filter which identifies your 10.000 records can be tricky, but would look something like this:
ID IN (SELECT ContactId FROM CampaignMember WHERE CampaignID = ‘003300000112345’)
Where 003300000112345 is the Id of your campaign.
Not so straight forward, but with DataTrim Dupe Alerts we have already made the preparation for you to make this much easier.

Simply Add a Field on the DataTrim Dupe Alerts Object, called Campaign, and make it a lookup to the Campaign Object, place it on the page layout of the Dupe Alerts Page and you are ready.

On the Dupe Alerts page you will now be able to select the Campaign simply by providing the name of the campaign, or using the built-in function to look it up. 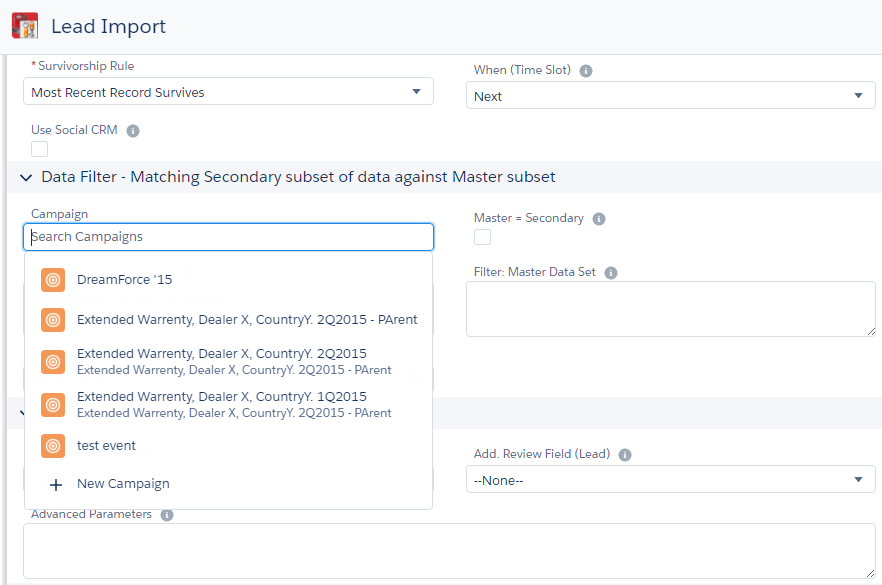 Notice that the Campaign filter value will be used in combination with the other filter values for the Secondary Data Set. Meaning that by default only the Secondary Data Set will be limited to the records in your Campaign. So, in order to match the Campaign records against themselves you must also tick the checkbox: Master = Secondary
On the other hand, if this was an incoming campaign, e.g. records which you imported from a show, exhibition, or other source, you may actually want to match the 10.000 records against ALL of the records in your database. In this case you leave the Checkbox: Master = Secondary unticked, Simple Right?

Many companies use the process above to manage their imports.
Each set of imported records are during the import linked to a Campaign (even if it is just a placeholder).
This allows them to keep track of where each individual record came from, and ensures a consistent process which can be used repeatedly for dupe checking each import.

If you don’t use the Campaign module for your imports, we still recommend you to make sure that you track the origin of all your new data.

Not only for having traceability back to the original source, which later will help you evaluate if a source is good, bad or in between, but it will also allow you to effectively match the new data against the existing data.

Simply create a field called Data Source (API name: Data_Source__c) on Account, Contact and Lead, and make sure that each time you import this field will be populated with a unique value: e.g. MIPIM_04_2017 for all the contacts imported from the MIPIM April 2017 event in Cannes, France.

When you then want to perform at matching of the newly imported records against the records already in the system, all you have to do is to create a simple filter for the Secondary Data Set to scope the matching: Data_Source__c = ‘MIPIM_04_2017’

Don’t hesitate to reach out to our support team if you run into any questions.

Available on the AppExchange

Get It Now Book a Demo